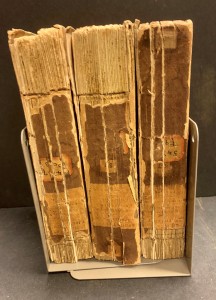 Experiments and Observations on Different Kinds of Air, and Other Branches of Natural Philosophy unbound in paper wrappers.

The now Canada-wide celebration of Science Literacy Week from September 16-22, 2019 was founded by a U of T grad, Jesse Hildebrand, with the original intent to encourage libraries to showcase their science collections. For this month’s rare book of the month we’re highlighting some images of a title from Bishop John Strachan’s personal library collection, Experiments and observations on different kinds of air, and other branches of natural philosophy… by Joseph Priestley. Priestly is credited with a making a number of scientific breakthroughs, including the discovery of seven gases, notably oxygen, which he named “dephlogisticated air.” Despite his renown as a scientist, Priestley also published widely on a number of topics and viewed his writings on theology and philosophy as his most important work. He considered his religious views as fundamental to his accomplishments in science. Strachan’s own library collection reflected diverse interests and included theology texts, science and natural philosophy.

The 1790 printing of Experiments and observations was an ‘abridged and methodized’ three volume edition of the original six volumes Priestly published from 1774-1786. Graham Library’s copy is unbound in the original blue paper wrappers and is notable because it bears Strachan’s signature on the title page.

Anyone is welcome to view materials from our rare and special collections Monday-Friday 9-5 pm by submitting a request to ask.grahamlibrary@utoronto.ca.

Graham Library’s copy:
Priestley, Joseph. 1790. Experiments and observations on different kinds of air, and other branches of natural philosophy, connected with the subject: in three volumes, being the former six volumes abridged and methodized, with many additions. Birmingham: Printed by Thomas Pearson, and sold by J. Johnson. http://go.utlib.ca/cat/3044752