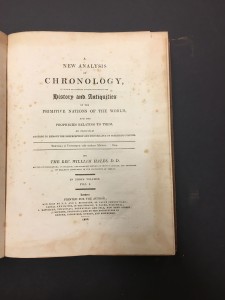 Title page of A New Analysis of Chronology…

A work entitled A New Analysis of Chronology: in which an attempt is made to explain the history and antiquities of the primitive nations of the world, and the prophecies relating to them, on principles tending to remove the imperfections and discordance of preceding systems. London: Printed for the author, 1809-1812. 3 vols. in 4, is part of the Graham Library’s SPCK special collection (H34 f V.1-4), and a unique item in the UTL catalogue. It forms part of the donation of books made by the Society for the Promotion of Christian Knowledge (SPCK), that constituted the original founding collection of the University of Upper Canada. Together the set fills a substantial 2400 quarto pages. Given its size, it is no surprise that a shorter version was published in 1817: A Synopsis Of The Signs Of The Times, Past, Present, And Future: Humbly Attempted To Be Traced From The Chronological Prophecies (Dublin, 1817).

Its author, William Hales (1747-1831), was professor of oriental languages at the University of Dublin, but in 1788 he resigned his professorship to take up a position as rector in the Church of Ireland (Anglican). In his early career as an author, he published scientific works devoted to subjects such as Newtonian physics and planetary motion. However, like much else in public affairs, the French Revolution changed everything, and increasingly after 1790 Hales’ concerns turned to political matters. Thus in 1793-4 he published two works, The Rights of Citizens and The Scripture Doctrine of Political Government and Liberty, both responses to Thomas Paine’s Rights of Man; and another, The scripture doctrine of political government and political liberty (Dublin, 1794), in which he sought to apply a scriptural perspective to the altering political context.

Increasingly, his desire to understand the shifting political environment led him to research biblical prophecy and chronology in the hope that such a study would assist in interpreting the “signs of the times.” This involved him in an in-depth study of original language sources such as Greek and Hebrew, as well as astronomy, and history.

Some of the subscribers who purchased A New Analysis of Chronology….

A prospective London publisher was reluctant to undertake the projected four-volume work forcing Hales to resort to publishing the work at his own expense with the addition of private subscriptions. With funding secured, the ﬁrst volume was published in 1809; the second, consisting of two parts, in 1811; and the third in 1813, though printed the year before. Hales’ research led him to conjecture about the meaning of contemporary events in light of a revised biblical prophecy. Central to this was the meaning of the three woes mentioned in the Book of Revelation (Rev. 9:1-11; 9:14-16; and 11:15-16: 17) and their application in a contemporary context. By Hales’ calculation, the third woe began with the murder of the Louis XVI on 21 January, 1793 and this last woe was to end with a period of persecution culminating in the year 1880.

Binding stamped: The gift of the Society for Promoting Christian Knowledge to the University of Upper Canada 1828

Millennial speculation at the level of the elite was nothing new in the Church of Ireland. It was of importance for Archbishop James Ussher in the 17th century, who took an interest in it as part of his dating system. Apocalyptic fervor grew as a result of the French Revolution. Significantly, the majority of early nineteenth-century writers on biblical prophecy were Anglicans; and a disproportionately large number of these were educated at the University of Dublin. Spurred by traumatic events such as the French Revolution and encouraged by works such as A New Analysis of Chronology, they began to study Scripture more intently. Out of this was to develop a revived interest in millennialism, which in the 1820s and 1830s worked itself into a fervour and was to play a significant part in the large exodus of Anglicans from Ireland (see conference hosted by Trinity and Wycliffe Colleges 18-21 June on the theme of trauma.) No doubt, it was out of this apocalyptic environment that the SPCK felt it incumbent that the collection of books for the new University of Upper Canada should include Hales’ work. In this way was an interest in biblical prophecy and its application to contemporary events, transferred from the Old to the New World.