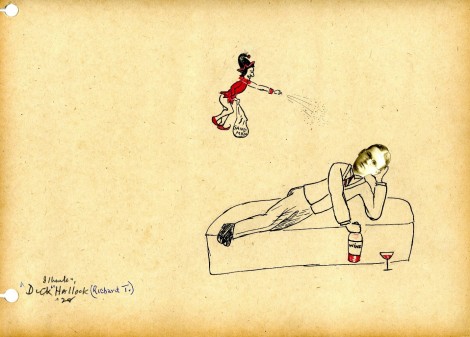 “2T8 assembled at old Trinity in the fall of 1924. One of the first things we had to do was sign a pledge not to bring liquor into the College. I probably thought, “Why would I ever want to do a thing like that?” Little did I imagine the evil influences I would be subjected to. Many of us later resented having had to sign a pledge we wouldn’t be able to keep, and that resentment accounted in part for the original last line of our year yell: “Give the Prov and Lloyd the gate!”  (Lloyd was “Auntie” Lloyd Hodgins, then Dean of Residence.) Subsequently we felt uneasy about that line, and changed it to: “Worthy men of church and state.”

Richard T. Hallock was a member of the Trinity College Class of 1928, and graduated with a Bachelor of Arts in Oriental Languages in 1929. While at Trinity Hallock was head of his year in 1926-1927, assisted at the Trinity library in 1928-1929, and edited the Trinity Review. After graduating from Trinity, Hallock studied Assyriology at the University of Chicago, receiving an M.A. in 1931 and a Ph.D. in 1934. After completing his education Hallock remained in academia as he worked as an assistant on the Assyrian Dictionary project at the Oriental Institute of Chicago. In 1941 he was a civilian employee working on cryptography at the War Department and, after the United States entered World War II, Hallock was a second lieutenant in military intelligence where he played an essential role in decrypting Soviet messages in the Verona project. Hallock continued to work in intelligence in Washington until 1947 when he returned to the University of Chicago Oriental Institute as a research fellow. Hallock was named associate professor in 1963, professor in 1970, and retired as professor emeritus in 1971.

From October 1927 to May 1929, while living in residence at Trinity College, Hallock kept a diary that recorded his daily activities, thoughts, and musings. This diary, originally handwritten in notebooks, was typed and given an introduction by Hallock in 1978. It is from this typed document, donated by Hallock to the Trinity College Archives, that the following glimpses at life as a Trinity College student in the 1920s come. Over roughly 200 pages Hallock describes his daily routine involving lectures, meals at and away from College, engagement in sports such as tennis, rugby, soccer, and skating, his work with the Trinity Review, the Lit, and general antics undertaken by the men of College. In the words of Hallock himself, “if you are ready for a fantastic journey, just hop aboard the Time Machine, set the dial for 16/10/27, hang on to your hat, and awa-a-ay we go!”

Hallock began his diary on Sunday October 16, 1927, an occasion described with tongue-in-cheek fanfare and optimism for the future of the diary. Hallock writes,

“No doubt a famous day to look at it from the point of view of the distant future, for on that day did not I, Richard Hallock (no less), start a diary destined to far outshine (why strain to be literary, to carelessly split an infinitive is no crime here), yea to eclipse, almost, the diary of Samuel Pepys, hitherto generally admitted as the paragon of diarists, and, indeed, the inspiration of this competitor. Best not to wander too far away, tho’, as Sunday dinner (supper) has been finished these ten minutes, the old but faithful alarm clock indicates 9:30, and bedtime is not very far in the offing.”

As the diary continues Hallock exposes a personal struggle not unfamiliar to students of today: waking up in time for morning lectures. On one particular Monday in October 1927 Hallock wrote that “at a quarter after ten I pushed back the covers and hopped up. I had awakened first before eight, and after some trying debate decided to miss breakfast and Meek’s lecture to gain lots and lots of sleep.” Hallock’s struggle to wake up on time in the mornings is expressed time and time again throughout the diary, although as much as he disparages his late rising, he seems to have been tasked with the sole responsibility of waking his friend Harv up in the mornings, a task that was not always the most successful, as seen in the entry for 21 November 1927,

“Started the week wrong by rising sleepily at a quarter to eight and not shaving. Between breakfast and ten o’clock, however, I labored abundantly, finishing both the translation and the composition for Meek. Found Harv in bed, but he gave me his exercise to take. And so alone to the library with threatening skies above and moisture underfoot. After the lecture came back and read a letter that came from mother, and the Varsity, and wrote the diary up, and then went to rout Harv out of bed.”

In addition to the more mundane aspects of life Hallock describes activities at Trinity and around Toronto. His description of a rugby game against Victoria College in November 1927 was treated with a certain amount of literary flair

“… A most discouraging game. Vic stepped into the lead with a rouge and a touchdown. In the next quarter Trinity made things close with a tough, but Vic quickly widened the gap with a string of rouges, and finally wound it up with a couple more touchdowns. Victorians very jubilant of course. The game ended in gloom – both mental and atmospheric.”

His entries on 10 December 1927 and 21 January 1928 illustrated that common winter activities in the 1920s – skating, Christmas shopping – did not differ much from those of today

“Before going to Hell Gk I got Red to agree to a trip downtown, and we arranged a rencontre at the college at ten, Weather quite mild. Walked down University and along Queen. Stationery, Xmas cards (14) and soap at Woolworth’s, where we saw Branion and his girl buying a book for Mrs. Kirkwood.”

“Then to the rink, where we got along all right. A lot of girls seemed to want to be picked up, but I didn’t test whether or not appearances were deceiving. Clare stumbled a bit on the turns and complained of sore legs but altogether did nicely. We had hot dogs – such hot dogs! – before leaving, and afterward Clare had food in Fax’s and I a ginger beer.”

In addition to athletics, Hallock describes familiar College activities such as the Lit,

“At the Lit my side – the opposition – successfully opposed the motion that this house would rather be the Skushok of Spitoh than the present Mayor of Chicago.”

… as well as a healthy amount of pranks and antics ranging from attaching a “no dumping” sign to trees and doors to an incident described in the 23 March entry,

“After lunch stood on the balcony, smoking my pipe, with Red, at peace with all the world, when a drenching flood of water descended on us, amid shrieks of laughter from all over the quad. While I was changing my clothes and sewing a button on the shirt I meant to change to, the Dean came up and raged at Summerhayes, who was drawing water for further foolishness – not that I think him responsible for the first. I quite sympathized with the Dean for once.”

In nearly every entry Hallock describes the work he is doing for his various classes but a couple of accounts of attempted scholarly pursuits stand out, including rejection from a literary magazine…

“Father wrote that … “My Baby Loves Me Now” returned from “College Stories” without any rejection slip, let alone no personal one, and that after four weeks. Oh well, I’ve been turned down by better magazines – and that more politely.”

… and attempting to bake clay inscribed with Assyrian signs.

“In the evening made Assyrian signs on clay awhile, then tried to bake a bit of clay with a sign on either side, using the Packer’s Tar Soap box as an oven. Worked beautifully, but in trying to remove the baked clay I dropt [sic] it and it broke into dust. So, discouraged, read another story in the Golden Book. Then bed, and oblivion.”

In all, Hallock’s diary provides an entertaining look at aspects of life at Trinity in the early twentieth century. If nothing else, the diary shows that student life remains remarkably unchanged from one generation of another!

Guest post by Amie Lalonde (1T6). Amie is currently working as the Trinity College Archives Assistant and will begin graduate work in history at U of T in the fall 2016.