This month’s featured rare book is a Novum Testamentum Graece, printed in Antwerp in 1572 by Christophe Plantin. This Greek New Testament is volume five in Plantin’s eight volume series, printed between 1568 and 1573, known collectively as Plantin’s Polyglot.

Plantin set about on this massive undertaking, which was overseen by theologian Benito Arias Montano, in order to prove his loyalty to the Spanish King Phillip II, a Catholic monarch, since there were rumours that Plantin’s sympathies lay with the Calvinists. Antwerp was under Spanish rule at the time, and keeping the monarch happy was Plantin’s top priority. Phillip was so impressed that he granted Plantin the right to print all official Roman Catholic texts within his kingdom.

Plantin used his printer’s mark, a hand extending from a cloud and holding a compass, on all of his books. The motto in the ribbon, “LABORE ET CONSTANTIA” translates to “By work and perseverance”.

This volume contains the complete Greek New Testament with interlinear Latin, as depicted below. 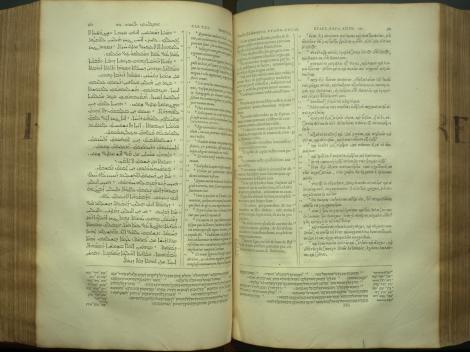 The John W. Graham Library’s copy was donated by the Rev. Canon Henry Scadding upon his death in 1901. Scadding was the first person to be enrolled at Upper Canada College, and after he graduated from St. John’s College, Cambridge, he returned as a tutor. There is currently a Day Boy House named after him. In addition to being an educator, he was the long-time rector of the Church of the Holy Trinity, Toronto, and well-published author.

Like all our rare books and special collections items, this Novum Testamentum Graece is available for consultation any time in the John W. Graham Library. For further information, please inquire at the circulation desk or contact us at ask.grahamlibrary@utoronto.ca.