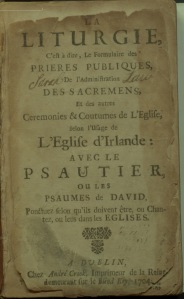 Why would a French translation of the BCP be published in Dublin in 1704, since its population was largely English-speaking? The answer lies with the Huguenots, that group of French Protestants who were ejected from France by King Louis XIV when he revoked the Edict of Nantes in 1685. The latter had been enacted by his predecessor, Francis I, in 1598 by which he granted toleration to French Protestants called Huguenots. An estimated 10,000 of them fled to Ireland in the 1690s.

Dublin printers worked closely with the Huguenot community in the city, and the bulk of their output was religious in its subject matter. As well as careers in the army and the church, the Huguenots of Dublin were prominent in banking and international trade. Some also became booksellers.

Huguenots and the Church of Ireland

The first decade saw the emergence of two types of Huguenot congregations: those that conformed and adopted the liturgy of the Church of Ireland, and those that were non-conformist who retained their own forms of worship, thereby incurring the hostility of the established church and foregoing financial assistance that the state made available to conformist congregations. Attempts to impose conformity were not always easy, for example, some of the French pastors resisted re-ordination under the Anglican rite. But on the whole conformity made sense as it opened opportunities for advancement in the religious, social, and economic life of the city for the refugees. The Church of Ireland produced various publications including this translation of the BCP to assist these French Protestants conform to its form of worship and liturgy.

Further reading on the topic